(Show recording is at the bottom of the page) 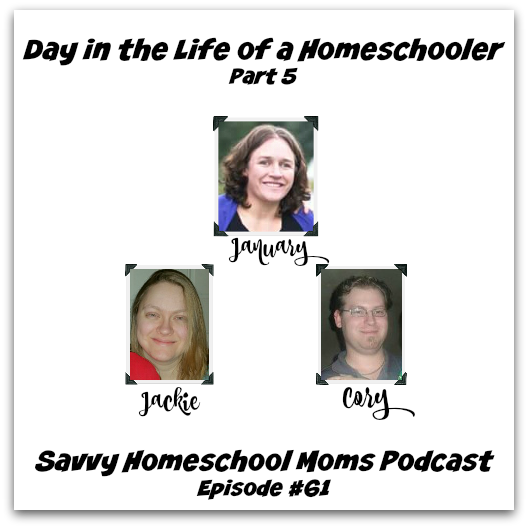 In this episode, the moms catch you up on what they’ve been up to lately and share three new Day in the Life Interviews including one homeschooling Dad!

Together: The Lightning Thief (Percy Jackson #1) by Rick Riordan, The Sea of Monsters (Percy Jackson #2), The Titan’s Curse (Percy Jackson #3), currently reading The Battle of the Labyrinth (Percy Jackson #4)
Maeven (age 15): started The Dragonet Prophecy (Wings of Fire #1) by Tui T. Sutherland again
Tyren (age 10): The Story of the First World War by Paul Dowswell, The Maze of the Beast (Deltora Quest #6) by Emily Rodda, The Small Adventure of Popeye and Elvis by Barbara O’Connor, The Valley of the Lost (Deltora #7), Return to Deltora (Deltora #8), The Taken (Foxcraft #1) by Inbali Iserles, Mark of the Thief (Mark of the Thief #1) by Jennifer A. Nielsen, currently working on The Colossus Rises (Seven Wonders #1) by Peter Lerangis
Me: Library of Souls by Ransom Riggs, Girl Underwater by Claire Kells, Divergent/Insurgent/Allegiant by Veronica Roth

Dani (age 13): Doodle Lit by Jennifer Adams and Alison Oliver, Has been very focused on her music books.

This episode is sponsored by:

Moving Beyond the Page – homeschool curriculum for hands-on, creative, and gifted learners. Learn more at www.movingbeyondthepage.com.