Well we had some more technical difficulties…Beckie’s computer died. We weren’t sure when we were going to be able to record because that’s the only device she has that she can Skype with her headset (for the best quality sound)….but they figured out that it might be this one thing…ordered a replacement part, waited for it to come in…it worked!! Then less than 24 hours later that part died! Really! I’m not making this up! Unbelievable, eh?

Turned out the part was faulty, ordered ANOTHER replacement part (same thing), it was overnighted to her and….VOILA! We’re back in business!

Problem is now its during the week, which is much harder for us to find time to record. (We usually record on weekends). But we are going to keep trying!

Got the next episode almost completely planned out already, just have to finish and then record.

Again, so sorry for all the delays. As with all of you, our kids are our #1 priority, so the podcast has to squeeze into our lives where we can fit it. Lately that’s just been impossible…but we are as disappointed as you about it and are working to remedy it! 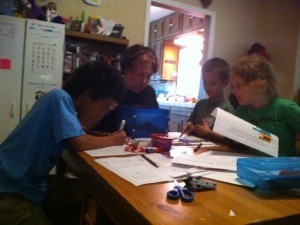 Just to show ya we’ve been busy, here’s Beckie teaching our homeschool science co-op to the little boys (big girls do a different book on their own). 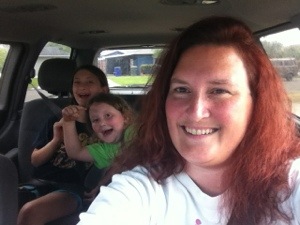 And while I don’t have a pic of me doing all the stuff I’ve been doing (too busy to stop and take pictures!), I do have this pic of my new hair cut and color with my peanut gallery in the background!