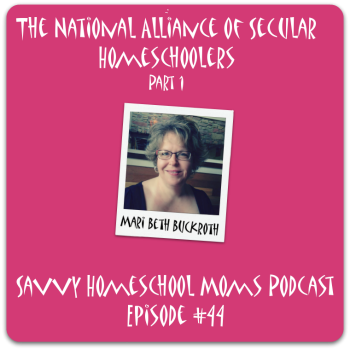 In this episode the moms share part 1 of their interview with Mari Beth Buckroth, the Inappropriate Homeschooler and founder of the National Alliance of Secular Homeschoolers, and talk about what they have been up to so far this summer.

Tina:
Together– The Journal of William Thomas Emerson, a Revolutionary War Patriot by Barry Denenberg  (My Name is America Series)
The Winter of Red Snow: The Revolutionary War Journal of Abigail Jane Stewart, Valley Forge, Pensylvania, 1777 by Kristiana Gregory (Dear America series)
Maeven (Age 13) — The Battle for Wondla by Tony DiTerlizzi
The Familiars by Adam Jay Epstein
Inkheart by Cornelia Funke
Tyren (Age 8) —Rowan and the Ice Creepers by Emily Rodda
Grimoire by Brad Strickland
Me–The Battle for Wondla by Tony DiTerlizzi
Son of a Witch by Gregory Maguire (NOT KID FRIENDLY!)
The Ocean at the End of the Lane by Neil Gaiman (Not kid friendly either)
Fortunately the Milk by Neil Gaiman (children’s book)